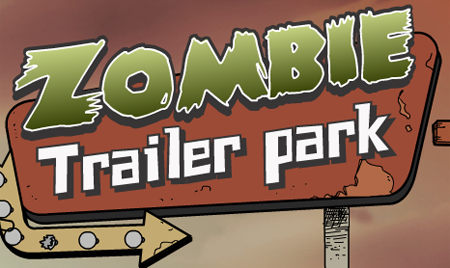 Zombie Trailer Park manages to capture some of the best parts of a number of genres. It’s a real time strategy game, with resource management and battle units and everything else that makes you play an RTS for hours on end. It plays a little bit like a player vs. player shooter with the back and forth nature of the combat, and it’ll make you think of Monopoly when it comes to erecting trailers to make more money and hire more fighters.

Zombie Trailer Park is basically just a good, well designed, simple RTS experience, but with a fairly unique aesthetic, being rednecks vs. zombies. We’re not sure this theme has ever been used, but it seems to work very well. The zombies approach in a steady stream while your trailer park will be home to a number of different fighters from basic “shovel men” who just smack zombies upside the head with shovels, to preachers, capable of laying holy waste to dozens of the undead at a time.

Your resources come in two categories: money and “Yee Haw” points. The Yee Haw points allow you to save your money and summon emergency forces. There will be times when you just can’t hire enough combatants at once to get rid of the horde of zombies attacking your trailer park, and that’s when you’ll need to call in the angry mob.

Over the course of each level, you build new trailers and buildings, each one providing its own unique properties. A basic trailer might only allow you to hire five more combatants at a time, but a church will allow you to hire preachers. The basic idea is to keep building up your forces so that you can eventually push the whole horde back and attack their base. When you destroy the zombie base, you win that level. Let the zombies destroy your trailer, and you lose.

Zombie Trailer Park is simple, but there’s really a world of variety within the game. There are a lot of ways to play it. Some players will be more aggressive, hiring as much help as they can and beating back the horde at a steady pace. Others might save up their money and Yee Haw points to buy a church and a preacher and high powered special attacks as soon as possible. However you play it, you can beat a level in just a few minutes, so it’s the perfect RTS to play when you’d rather not spend tens of hours trying to build an entire civilization from the ground up.