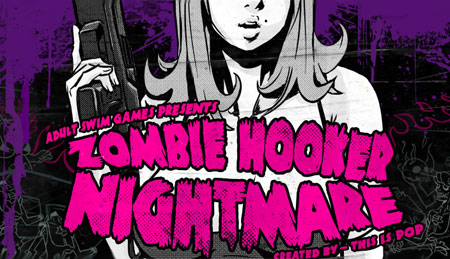 Is there anything worse than an endless horde of zombie hookers? Not if you’re an honest working girl trying to get by in this crazy, mixed-up world; you already have enough competition. Welcome to Zombie Hooker Nightmare, in which you play as Lola, a prostitute beset by undead hoes who will stop at nothing to bitch-slap her to death.

If you hope to survive the zombie onslaught, you’ll need combat skills. In addition to Lola’s fists and feet, many other weapons are available to aid your zombie massacre: shovels, Molotov cocktails, various firearms, flamethrowers, golf clubs, and severed limbs, to name a few. Weapons can be found lying on the ground, or they can be uncovered by wrecking tombstones. Each weapon (excluding those attached to Lola herself) can be used only a set number of times before it vanishes from your inventory.

If you hang around long enough, new baddies begin to appear: undead prostitutes in red miniskirts who belch noxious fumes, headless female torsos that chuck flaming skulls at you, crawling babies with dynamite crammed in every orifice, and more.

Zombie Hooker Nightmare is a fun little game with a wicked sense of humor. Anyone in the mood for zombies and/or hookers will not be disappointed by it.