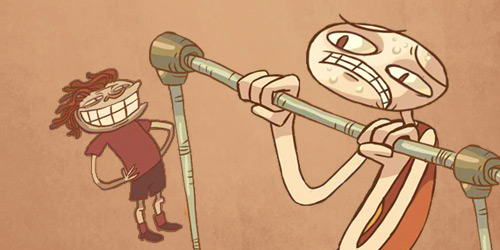 Trollface Quest 6 is a point-and-click puzzle game that’s less of a troll than you’d think – although it may cause your force to contort into shapes not dissimilar to the titular meme.

TQ is most heavily reminiscent of traditional adventure games of yesteryear, albeit in a minimalist package. Rather than roaming a sandbox world finding puzzles at your own pace, the player is presented with predesignated scenes to solve by selecting the right background objects at the right times. This silly, non-heroic journey through a variety of sporting equipment sets and exercise routines might not be epic, but the ugly charm of its art style and quirky soundtrack never really get old.

With each scene devoted to something seemingly trivial, like doing chin-ups or riding a skateboard, you would think Trollface Quest 6 to be a pretty easy game. But, like the adventure games it mimics, TQ manages to hold on to a certain degree of challenge by using twisted in-universe logic to provide both obstacles and their solutions in each new level. While selectable objects often are arbitrary, much of the fun in Trollface Quest is selecting random things and simply seeing what happens. Frustration is kept low by the rapid-fire pacing of each scenario, as well as the limited tools available, which leads to you succeeding sooner rather than later.

The vivid, Warner Brothers-like, mean-spirited glee of Brazhnik’s artwork also is carried over in tone with the UI interface, which gently pokes fun at the player with frowny face emoticons, but otherwise adheres to industry standards in intuitive, if uncreative menu options. The soundtrack, while appropriately shrill but gleeful, does manage to capture the frantic cruelty of the game, but, sadly, also is a little too repetitive and short.

Also available as a mobile app for both iOS and Android devices since early 2015, Trollface Quest 6 is, like previous entries in its series, a great, albeit shallow take on the old adventure game genre. Anyone who longs for the days of Sierra’s glory will want to give this one a try, even if the results are less romantic adventure and more MAD TV-inspired.

Are you ready to troll the sportsman? Play the sixth installment of Trollface Quest HERE! Enjoy!