Trollface Quest 13 is the latest installment in this long series of unique games. Trollface Quest 13 is a game that really tries to tell jokes on each screen rather than present logical or traditional methods of gameplay. You are presented with the same hand-drawn graphics from the other titles in the series. These graphics are well done and use muted colors to relay a certain type of mood. You do get some looping music that fits the tone of the game perfectly. The sound effects on each level are minimal although they do a decent job of letting you know what is happening. 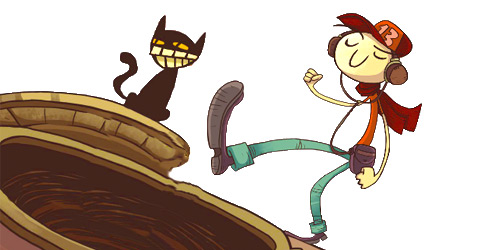 You seem to play the role of a trickster in Trollface Quest 13. Your goal on each level is not to efficiently complete some task. It is usually to annoy, punish or harass the main character on the screen. Alternately, the goal of a few of the levels appears to be just to get an atypical or opposite result from what a normal person would expect. The goals are not very clear from the start. It takes a little getting used to in order to decipher the sense of humor the game has with the level design.

Trollface Quest 13 is closest to a point-and-click adventure game with a strong emphasis on narrative and humor as opposed to problem solving. There are 13 total levels in the meme game. Some of the puzzles that you face involve doing things like destroying an elevator, sending a construction worker through a hole in the ground and ruining a coin flip. Other levels are a little more abstract such as one where you need to jump over a frog instead of allowing it to jump over you. All of your actions are done by clicking the mouse on objects or locations on the screen.

There are a handful of issues with Trollface Quest 13. The first is that it does not have many game elements. It is basically a way to tell jokes visually. Another issue is that the puzzles are not really challenging. Most can be completely with just two to four clicks. They also make little to no logical sense. The solutions can seem random. The game still manages to be entertaining for a short time. All 13 levels can be completed in under five minutes. If you are a fan of memes, then you should know the trollface and so this game could be fun although you will probably not want to replay it later.

Become a trickster and let the 13th trollface quest begin!