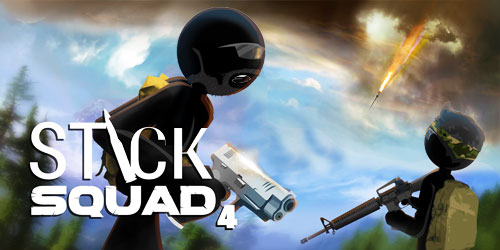 There are those who are not big fans of sniper games. For whatever reason, they just don’t enjoy them. And that’s fine, but for those who say they don’t enjoy sniper games, I would like to suggest Stick Squad 4 – Sniper’s Eye.

This is the fourth installment in the Stick Squad series of games and it is also available for Android devices. It brings the best of sniper shooting and stick figures to video gaming. For anyone who has played the previous installments in this series, the atmosphere of the game will be the same. The stick figure people are walking, running, relaxing and enjoying life. Players enter the game in first person, sighting through a scope. The animation is fairly natural and the visuals are good quality. Players move their scope with a simple hold and drag motion. Once the target is within the sights, players shoot.

Players find they are the good guys in this game scenario. While there is a story to accompany the game, it can be summarized by saying players should complete their mission as efficiently as possible. Stick Squad 4 awards players for shooting accurately and quickly. Each mission presents at least one target, sometimes more and when a mission is successfully completed new missions are released.

As players advance their missions become more difficult. Initially targets are fairly easy to hit, but this becomes more difficult with each advancing level. Higher levels also require players to use strategy and stealth to complete missions. Stick Squad 4 is not without its faults. There are a couple parts of the stickman game that could be improved, such as not always knowing what the target is, and being able to continuously repeat missions. However, overall this is a fun little game. The online tutorial makes it easy to understand and get right into playing.

Snipe down the baddies HERE! Have fun!