Save the Chicken is a little story about making objects spontaneously disintegrate so that you can bring a non-flying bird in a helmet down to the ground from his precariously-stacked tower. 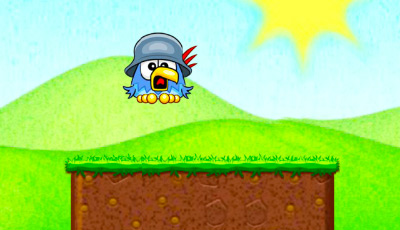 If that sounds a little random, it’s because Save the Chicken is not a game that’s much about its theme – although the few sound effects and cartoony art style do make that theme amusing enough. Your mysteriously blue chicken is the primary objective, rather than protagonist, of the game, which requires you to simply select different objects in order to bring the bird down to earth (usually from three or more layers of stacked items). These items, unfortunately, display less creativity than the titular character, and consist primarily of generic construction materials. The artists clearly have demonstrated the talent to do better, and it’s a shame they didn’t branch out more. On the other hand, the limited tower materials also provide immediate visual clarity on small mobile screens.

The game begins to come into its own on level 4, where semi-advanced physics first come into play in ways that can make you lose – on more ways than one. As items disappear, your bird will topple, and not all items can be destroyed. This requires balancing your azure chicken so that he doesn’t roll off the narrow platform or get stuck on an indestructible object. It’s a simple, but effective ploy that adds complexity and longevity to the game primarily in terms of its diverse level designs, rather than in adding new controls.

The mobile game is well-balanced for younger gaming enthusiasts, and suitable both for children and for adults who need to unwind briefly with something that’s not very stressful. It’s effectively ‘G’ rated, with no animations for injuries befalling your bird, or even fiery explosions for the surprisingly anemic TNT blocks. Its level selection allows you to retry previous levels for a better score whenever you like, giving you the freedom to experiment with different physics-based mishaps.

Adults may find the game more than a little too easy, as it takes quite a while before the levels ramp up to anything resembling a challenge, and even the worst of them are a far cry from a Rube Goldberg puzzle. But there’s also little outright flawed about Save the Chicken, as a bite-sized puzzler – unless you have a low tolerance for its repetitive, overly perky soundtrack!

Play Save the Chicken on your mobile phone!

(via Guru of FlashGames)