Minecaves might best be described as Lara Croft meets Pacman in the Bejeweled universe. The point of the game is to move your avatar, a boxy, vaguely humanoid character, through mazes. These mazes are designed to look like the stone walls of a mine, although very neatly and clearly defined, and the explorer must collect items to score points and avoid obstacles that subtract points and take away lives. 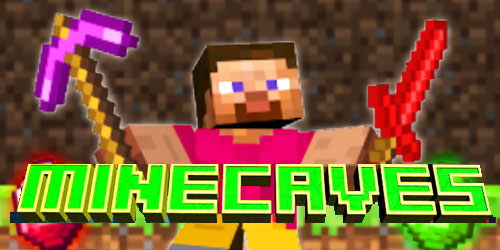 There are very few instructions for the game. A directive on the first screen tells the player to move with the mouse or arrow keys to collect gems and stars and to avoid enemies such as bats, pools of water, and other hard-to-identify obstacles. During game play, additional messages show up briefly to direct actions or to give clues about how to overcome obstacles. Since the only action the avatar can take is to pass over a particular item, the only decision for the player is in which direction to move and when. Merely traveling through the maze is not sufficient; the player must choose the correct path to pass over the tools or other objects in the right order to accomplish tasks. For instance, passing over a switch lowers a pool of water that otherwise would cause damage when the avatar runs through it.

Minecaves is different from many other maze-type games in the way the avatar moves. He travels in one direction until he hits a wall, stone block or some other barrier, and can only change direction from a dead stop, eliminating any decision-making for turning corners. He also moves very quickly, so it can be hard to see what action has triggered a helpful message.

For some reason, the developers have chosen to use very blocky, old school graphics. Everything looks squared-off and pixilated. This may have been done to emulate the earliest video games, but it is somewhat of a distraction since it can be difficult to discern what an object is. The color palette also is stark and dull. Visually, this is not an interesting game.

Minecaves consists of 32 levels of increasing difficulty. Of course there are music and sound effects which can be muted. The music is nondescript electronica which does not distract but does not add much either and the sound effects are negligible. This is not a bad game but the limitations outweigh any real play value for more sophisticated gamers.