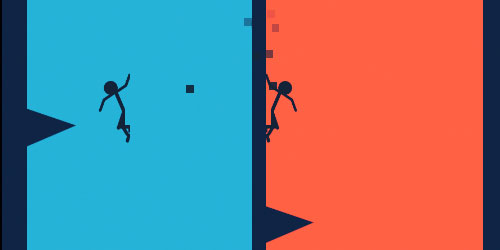 Make Them Fall is a game by Ketchapp Games, who also have developed the most played game in 2014, 2048. It is designed for iOS and other mobile devices and has very simple graphics. The simple graphics are actually a big benefit because you need to be able to identify threats fast while playing. There are basic sound effects and no background music. You do get to choose the difficulty of the game when first starting. The five settings available are normal, nightmare, hell, inferno and impossible. The difference between the settings is how many falling people you have to manage at once. The hardest level has six people on the screen at one time.

The basic concept of Make Them Fall is that you need to safely guide at least two characters down a shaft. The shaft is lined with sharp spikes. Your characters travel down the shaft on either the right or left wall. Tapping on the shaft causes your character to quickly jump to the other side. You need to do this in order to avoid the spikes that appear and scroll up. Something that is good is that your character responds to the taps very quickly and without delay. Additionally, the collision detection is excellent. You can narrowly escape spikes without worrying about dying before you visually touch them.

The real challenge and unique feature of Make Them Fall is that you need to manage multiple characters. Each character is in a separate shaft leading down. Managing one character is easy. It is far more difficult to watch two characters at once. You will need to constantly tap both sides of the screen in order to keep the characters alive. This can get confusing especially when your characters are basically side-by-side in the middle. Complex networks of spikes in one shaft can cause you to completely ignore the other one. If either character hits a spike, then your game ends.

There is no endgame in Make Them Fall. You just keep falling. The spikes come faster the longer you fall. More spikes also start to appear. You gain points for all the spikes that you avoid. Your high score is recorded on the first screen under the difficulty level you selected. The only problem with the game is that it can become repetitive. There is no variation in gameplay. Make Them Fall is a challenging game that forces you to multitask in a unique way.

Grab your mobile and play the game now!