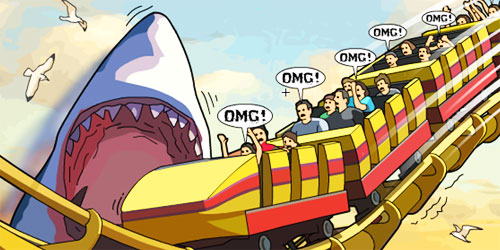 Los Angeles Shark is a game that grabs your attention with the bombastic enthusiasm of arcade gameplay and a black humor theme with a serious bite. As befitting a game with its simple controls (limited to movement, a ‘bite’ attack for your shark and a restart button), Los Angeles Shark is about one thing and one thing only: murdering anything you can get your teeth into as you swim through a 2D water stage. While some of your shark’s acrobatics may give you flashbacks to Ecco the Dolphin, this game is less about fancy maneuvers or the wonders of undersea exploration than it is about relentless onslaught.

You’re given a choice of targets ranging from killer whales to scuba divers on the low end. These meager foes represent one to three bites apiece, making rapid-fire chained snacking your best way to build up points. While the aquatic life is a bit sparser than would be ideal, the split environments work extremely well for providing just the right amount of differentiation to keep the mind engaged, but not overwhelmed by the colorful targets. Unfortunately, the soundtrack doesn’t display quite as much subtlety, as you’ll most likely want to turn down the volume on the repeating, in-your-face track as it loops over and over again.

However, the real depth in Los Angeles Shark lies in its high jumps, which can only be done after a deep dive. These jumps allow you to belly flop, the only way that numerous boats and other surface-skimming targets can be converted into delicious points. If you aim just right, you can even access a quicktime even that lets you destroy helicopters, potentially setting off chain reactions that wreak mass devastation. It’s these moments, when your screen is buried in the chaos of blood and explosions, that this game really comes into its own.

If you’re a gamer who misses the days of popping in quarters for lives of adventure lasting a bare minute – if you’re lucky – then Los Angeles Shark has your back. However, sensitive gamers who aren’t interested in style over substance may find this swim in the seas a little too straightforwardly boisterous for their tastes.