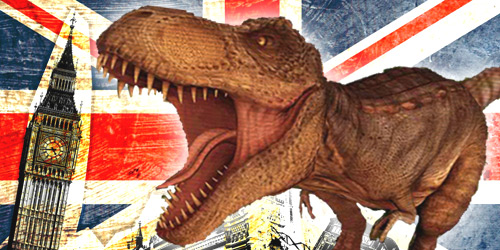 You are put into the role of a rampaging dinosaur who wants to destroy an entire city in London Rex. The graphics are not bad in the game although some of the enemies and background images could be better. Your destructive actions are accompanied by a heavy guitar soundtrack that emphasizes the mayhem. Sound effects are relatively generic. They still convey a satisfying feeling every time you do something noteworthy.

London Rex is a side scrolling game without too much of the platforming expected from the genre. The game uses the familiar one to three star rating system to determine how well a level was completed. The difference is that you have to find the stars on each level. You accumulate stars between levels. Stars allow you to upgrade your dinosaur. Each dinosaur has stats like speed, jump height and health. Higher-level dinosaurs make it easier to complete tasks.

Your main task on each level of London Rex is to eat a certain number of humans. The level always has the exact number you need to eat and nothing extra. You eat a human by walking up, aiming the head of the dinosaur and clicking the left mouse button. This is the only way to finish the level. The people are passive in some cases. They start to become increasingly violent as your progress through the levels.

You eventually begin to encounter humans with guns and vehicles as the levels rise. You are forced to start using different strategies later. One example is humans on motorcycles. You cannot just eat them with your jaws. You need to use objects like barrels on each level to do damage and eventually defeat them. This adds an interesting gameplay element to London Rex.

London Rex does have somewhat clunky controls as you start to progress. It becomes increasingly difficult to control your dinosaur with the accuracy needed to do things like destroy motorcycle riders. Something else to consider is that the jumping mechanic in the game and the hit detection are not always accurate. It can take several attempts to land on even a low platform.

London Rex has everything you would want from a destruction game. It has defined levels, a simple control scheme and a progression system. The fun of rampaging through a major city is captured pretty well. The entire concept is also fun and somewhat inventive. London Rex is a good game that deserves a look especially if you enjoy controlling dinosaurs with unbridled power.

And HERE you can play the game and rampage London as a dreadful T-Rex.