Load Up and Kill is a Flash game that’s generated plenty of controversy. Some people feel that it’s remarkably violent for a basic free Internet game. A few commentators have expressed the view that it features material that wouldn’t be acceptable in a major console game release. 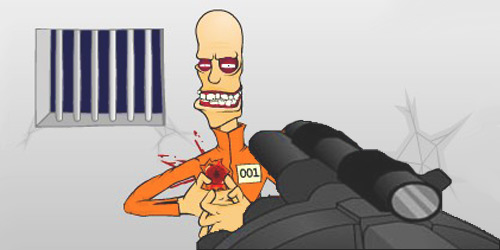 The actual game itself is quite simple. Set in a blood-curdling prison, players are expected to learn how to load and operate each of the weapons without any further instructions. Bonuses are awarded to players who can do this before the timer runs out. Victims wait in a variety of rooms located throughout the game, but they won’t be accessible until the player has a ready weapon.

The left and right mouse buttons are really the only controls in Load Up and Kill. Players can use a combination of clicks and mouse drags to figure out how to use each of the weapons. No instructions are provided, which makes discovering how each tool works a great challenge for inexperienced gamers.

Some players feel that this process is much easier for those who have some basic knowledge of how these tools work in the real world. A few have suggested using charts from encyclopedia sites. The game isn’t particularly realistic, and it allows players to continue to use their weapon and kill the prisoner even if they run out of rounds.

It’s important to keep in mind that the game was intended as a sort of joke, and that the developers never intended it for children. Much of the controversy over it has actually served to make it more popular with the intended adult audience, and it’s a very funny game. The fake horror movie music and the insane sound effects serve to make the game that much funnier.

Players who want to play the game seriously will be able to accumulate medals over a long period of time. These achievements don’t necessarily do anything, but they certainly look nice. There’s no way to save the game, which means that players that unlock all of the medals might want to take a screenshot in order to save their accomplishment.

The game doesn’t take itself seriously, but there are a few secrets for dedicated gamers. Hovering the mouse cursor over the bottom part of the door will unlock a button that can give players access to a chainsaw that isn’t accessible by any other means. Using it grants players a look at another scene that parodies excessive video game violence.

Go, go, go! Play Load Up and Kill and punish the evil guy in the prison cell!