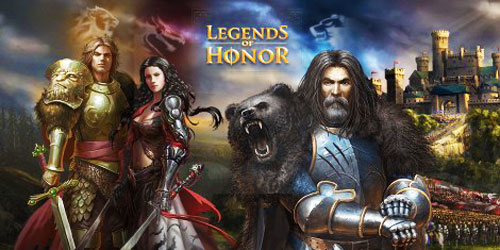 Legends of Honor has very nicely done graphics. Unfortunately, the graphics are very small even in full screen mode making it hard to appreciate all of the intricate details of each piece. The animations are fluid although they are rare on most play screens. One major drawback of the game is that there is no sound. There are no sound options. You are playing in complete silence. This really takes away from the game because there is no atmospheric music and no audio feedback that you clicked a button or something happened.

Anyone who has played a free online multiplayer fantasy strategy game in recent years will be familiar with how Legends of Honor works. You start the game with a simple castle located in much larger world. A good thing is that a tutorial is provided as soon as you start. The tutorial is very short although it does let you get right into the action. After the tutorial ends, you start relying on your quest log to guide you through the rest of the game. The quest log gives you tasks in sequence such as building a certain type of structure or gathering a particular resource.

Your goal in Legends of Honor is to grow your castle, build an army and dominate the kingdom. The game has basic resources like wood, stone and food that must be managed. You need to build and upgrade things like farms, barracks and houses. You eventually start building an army led by a hero. You can use that army to march outside your castle attacking bands of marauders or other player castles. Combat is all automated making it somewhat boring and confusing at first. You can join player alliances and gain access to chat. The problem is that the game wants you to do this about five minutes into playing. This does not allow you to make an informed decision since you likely have no idea what is going on in the world yet.

There are a few drawbacks to Legends of Honor. The first is that the user interface and text are incredibly small and difficult to see or read. The second is that everything is based on time. Constructing buildings can take hours or days for higher-level structures. The final problem is that the game keeps attempting to sell you gems for real-world money. Gems allow you to bypass the timers and build things instantly. Windows trying to sell you gems pop up every few minutes. Legends of Honor is a solid game although it is indistinguishable from the other free titles in this genre online.