When I saw the Lego My City 2 game, I smiled. That is because of how much my kids love all the different Lego games. I decided to check this game out in their honor. I had no idea what to expect. After playing it for a little while, I am glad I chose this game.

When the Lego My City 2 game started I assumed it would be a lot like the games my kids play on PlayStation. I played one of those games before and it was enjoyable. This game was not like that. I had to race around a Lego city and not even quite the same type of animation as in the PlayStation Lego games. The first stage, I was a police officer chasing a criminal around the city while collecting little Lego pieces. That sort of thing is a lot of fun for me. The only problem was, it was really hard to control the vehicle. I kept overturning and missing turns and losing the criminal due to wrong turns. The Lego pieces I was supposed to collect were also on the wrong side of the road and caused me to crash into things right away while changing lanes. I also didn’t realize right away that I was being timed. And once I caught up with the criminal I had no idea how to actually capture him.

Then the next stage in the free online game Lego My City 2 started and I was on water. I had to control a boat this time. And it was a lot more fun. This is partly because it was easier to control the boat. It was also easier to catch the criminals. However, it was harder to tell where I was supposed to go. I guess not everything can be an improvement.

When the next level of Lego My City 2 began I was suddenly surrounded by rocks and lava. I don’t think there were criminals to chase in this level. It was a little harder to control my jeep and much harder to know where I was supposed to go. The cop car and boat were more fun because at least I knew that I was supposed to be catching criminals. With the jeep and lava I had no idea what my objective was. I didn’t even know where I was supposed to go since there wasn’t a clear path anywhere until an arrow showed up. But the arrow didn’t make things any easier. I kept running into the lava and wondering why my vehicle wasn’t burning up. I’m not sure if I enjoyed not burning up or not.

If the vehicles were easier to control, this game would be a lot more fun. Even so, Lego My City is still a pretty fun game to play. I think once you get the hang of the controls, the game gets better the longer you play. 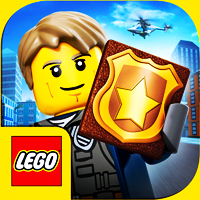