Online gaming is more popular than ever. Many modern games incorporate online features, allowing players from around the world to compete or cooperate in online matches. Some games can even be played inside a web browser. These games are usually free, since they are supported by the advertisements on the hosting web page. An example of such a game is Gun Mayhem 2. This game can be played with up to four players, allowing for fast and furious action.

This game is an awesome free shooting game, with a high degree of action and excitement. Players must conquer 16 difficult missions to complete the game. In addition to these missions, there are multiple play modes that enhance replay value. As players advance in the game, they will unlock new guns, perks, and other features. These power ups help prepare players for the more difficult stages later in the game. In addition, each new customization option adds new ways to tackle in game challenges, which adds a considerable amount of depth to the game.

The game play in Gun Mayhem is straightforward. The player can move their character around the screen using the arrow keys on the keyboard. Attacks can be made using either the shoot key or the throw bomb key. Shooting is effective against individual targets, while bombs are useful against groups of enemies. Each weapon has its own firing characteristics, requiring the player to carefully aim his weapon to score a hit. This aspect of the game can take a great deal of time to properly master.

Gun Mayhem 2 is a great game for those interested in either a quick dose of action, or those looking for a deeper challenge. The multiple play modes, character customization, and multiplayer capabilities all add depth to this game. Players should find hours of enjoyment from this free to play, browser based game. 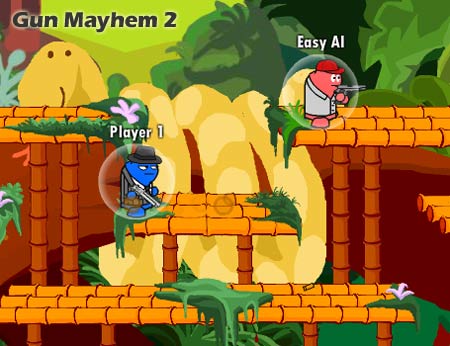