The latest installment of Dream Car Racing comes in the form of Dream Car Recing Evo. This title is jam-packed with new features and tracks for those who just couldn’t get enough of the original game. 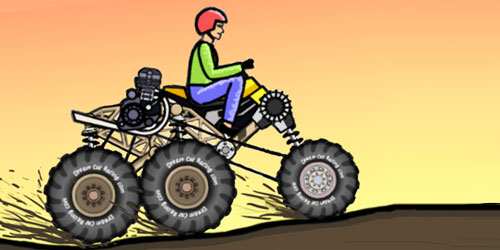 Dream Car Racing Evo is a side-scrolling racing game that puts players’ skills to the ultimate test. The idea is to survive the track in one piece by avoiding losing control of the vehicle over tricky hills and dips. New players will find the controls a bit difficult to maneuver with, but with time, it becomes easier.

The car is fully customizable, but in order to gain access to better parts and gear, you must play the game. As you upgrade and make changes to your car, you’ll get a chance to pit its sturdiness against challenging tracks. As you travel along in your car, you’ll run into booster items. You’ll also be able to pick up fuel that will help you travel further on the track. Failing to acquire fuel items can lead you to ultimately failing the round.

At the end of every round, you’ll see a general overview that covers how many coins you earned, the entire distance that you traveled, how much air time you got, and how many flips you completed. You’ll quickly find that the game awards more coins (used for purchasing upgrades) when you perform better.

After reading the overview, you’ll have the option of taking a break in your garage. This is where you’ll be able to make upgrades and changes to your car. If you manage to officially complete a track, more tracks will unlock for testing your skills. The Highlands level is immediately playable by new players, but levels such as Snow, Desert, and Dawn must be unlocked.

If you like a car that you’ve built, you can save it for later use by using the floppy disk icon in the garage section. Cars can be saved and later loaded, and they can even be imported into the included sandbox mode. If you’re an avid player, you can eventually build a car that is so advanced that it handles hills and dips with ease.

Dream Car Racing Evo is a great way to re-experience all of the feelings you had when you initially plated Dream Car Racing for the first time. New players will also be able to jump right in and begin playing this sequel with ease.

What do you think? Is this expansion better than the original Dream Car Racing?