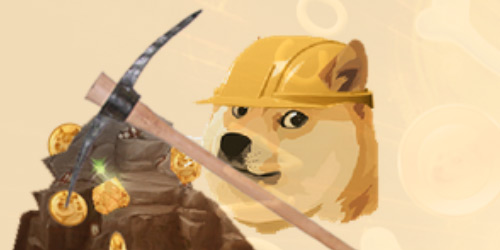 Just one of a series of nigh-identical ‘idle games,’ or games that, after they get rolling, allow you to play the game by idling and literally doing nothing. Like most other entries into this genre, Dogeminer is a clicker style idling game, in the same vein as Cookie Clicker. While there are no meaningful gameplay differences, Dogeminer does boast some modifications to its choice graphics that some gamers will, perhaps, prefer to the old grind of baking chocolate chip cookies in ever more ridiculous ways.

A clear thematic take off of real-life criminal currency mining, which has targeted BitCoin, LiteCoin and DogeCoin, Dogeminer challenges the player to mine for Dogecoins with each click of their mouse. Almost immediately, your screen will fill with a small army of adorable Shiba Inu-breed dogs in mining helmets, wielding pickaxes. These early upgrades will do the work for you, but you’ll still have more than a few minutes of clicking in your life if you want to get to the stage of mining without idling for a few hours.

Besides well-placed upgrades to stagger the rate of your mining activities, Dogeminer also includes a good injection of comedy in its presentation. Its impossible not to be amused at the thought of using ‘slave kittens’ to mine for a digital currency, but the limitation of upgrades to adding to the rate of mining does get a little old.

If you feel you’ve mastered all there is to see about the main game screen, side panels offer you a little extra meat to chew on. The expensive upgrades on offer in these side panels are limited, but provide some welcome changes to the gameplay style. Achievements and statistics are tracked with appropriate depth, and Dogeminer even offers an exceptional level of control over the animations and sounds, which is more than could be said for most idling games.

However, when it comes down to it, Dogeminer is a repetitive, finger-straining game that provides no particular gameplay enhancements, and an Android app is out, too. If you’ve never seen this genre before, Dogeminer is a good place to start, but old hands at it have no reason to pick up this cute little pup.