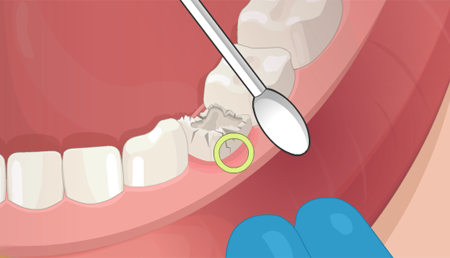 “Dental Surgery” is a game seemingly inspired by previous incarnations of the genre like “Trauma Center” for the Nintendo DS and the Nintendo Wii, but on a flash system. How will a simplified game of this nature work out?

“Dental Surgery” holds your hand every step of the way. The initial presentation is quite simple, but works well with the simplistic design. There are no questions on how to play the game and the menu is well done. The problem is, “Dental Surgery” doesn’t feel like an actual game. It tells you exactly what to do, what tools to use, and you simply point and click in order to perform surgery. Granted it is a flash game, and it is catered to the iPhone and tablet market, but many of the successful games on those platforms contain a lot more depth and even leaderboards. “Dental Surgery” contains neither. It is uncertain that one can even classify it as a game, as you are told exactly what tools to use and it is merely point and click there is no challenge to it whatsoever. There is a time limit, but as long as you are able to follow the directions adequately there shouldn’t be much of a challenge, if at all.

“Dental Surgery” seems to be a game trying to cash in on the current trend of flash games and iPhone/tablet games, but it falls flat on its face. It doesn’t feel so much of a game as much as an elongated tutorial. After you finish your initial playthrough, you can play as a specialist and recieve no assistance whatsoever — but this is for the very same level you have just beaten! It does award you a score at the end of each mission, but there doesn’t appear to be any kind of leader board. Another problem the game has is that there are just too many tools. What the game should have done is limit the number of tools used and give a tutorial at the beginning that isn’t the same level that you would be playing later. That way, you can have a fresh experience from the get-go. While there are scores given out, there is no excuse for no leaderboard in this day in age.

All in all, “Dental Surgery” is simply not an enjoyable game, and if one were to play on the Specialist setting, they would have to memorize where to use every single tool, which just isn’t feasible. A game like this has so much potential, drawing inspiration from “Trauma Center” and “Operation”, but it doesn’t live up to the expectations that those games have established.