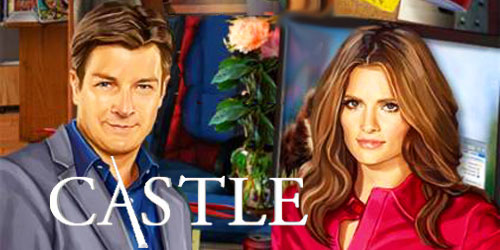 The Castle TV game involves finding hidden objects. It is based on the television show Castle. The game appears to be officially licensed by the broadcast network. The graphics are a mixture of photos that have been run through a filter to make them look like paintings and computer rendered objects. They are satisfactory for the mood of the game although there are few animations beyond static items sliding across the screen. There is music in the background but no voiceover work or atmospheric sound effects.

You take on the role of a detective in the Castle TV game. A basic story is given to you through some talk bubbles on the screen. The story is not very detailed or in-depth. You feel more like you are just being ushered from one screen to the next with as little plot as possible. This becomes a problem as you are expected later to try to return to crime scenes and make deductions of your own.

Gameplay involves using the mouse to find hidden objects within a static image. You have a list of the objects you need to find on the bottom. There is always at least one object not displayed that shows up at the very end. You have a time limit to find everything. If you find the objects fast, then you will receive anywhere from one to five stars at the end. These are used to investigate any evidence you find. The hidden object screens are broken up by visits with your partner, other characters and your office.

A major problem with the Castle TV game is that it introduces a large number of artificial barriers to play. If you want to have a piece of evidence analyzed, then it can take 10, 20 or even 60 minutes of real time. You have an energy bar. You have an office that you need to buy furniture for to make it more comfortable. You have daily quests. These are all extraneous things in a hidden object game. The goal is to have you use real-world money to buy gold. You can use the gold to basically bypass all the extraneous and unnecessary things in the game.

Even if you are not a fan of the original tv show, the core of the Castle TV game is a fine concept. It does add a little to the game to have you spending stars and money on the investigation. Unfortunately, the constant notifications to spend real-world money and the artificial elements like timers really ruin the experience. The Castle TV game might be good for fans of the show although there are better hidden object games out there with fewer frustrating elements.