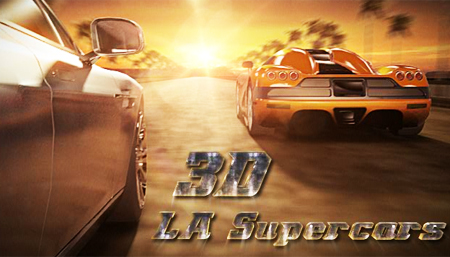 3D La Supercars is a fast-paced web-based free  racing game that combines the heart-pounding action of street racing with the ability to customize your vehicle into a machine that fits your driving style. Races take place in one of four courses that pit the player in a three-dimensional course, where the object is to speed to the finish line past hordes of rival drivers that will do their best to put the player out of commission. Money for upgrades such as acceleration and handling can be collected on the track, and driving requires a delicate balance of speed and maneuvering past the other cars that will attempt to inflict damage on the player’s car and put it out of commission.

The graphics of 3D La Supercars allow for an immersive 3D experience, and the scaling and animation are smooth and convincing. The lack of choppiness in the movement of objects from background to foreground definitely makes this one of the better-animated web games out there. The ability to customize your vehicle is also a great feature, and allows players of any driving style to trick their supercars out in a way that fits how they would race in real life, adding to the depth of the experience.

Unlocking the new stages after each race and getting the opportunity to add improvements are nice rewards for a job well done, although a scoring system to allow players to set their own records and beat them would be a nice idea to add replay value, since the game loses some of its direction after all of the courses have been unlocked and the maximum amount of upgrades have been purchased.

The AI of the rival cars makes for a decent challenge through the courses, and it can get tricky to anticipate their movements while swerving around obstacles littering the track at the same time. This makes up for the lack of a two-player feature, although the addition of that would be welcome, too, since it would be fun to burn some rubber with a friend through the well-animated, convincing three-dimensional courses. Overall, this game could use some more features, but it is an excellent and challenging way to pass the time, and it definitely holds its own against many of the free racing games out there in terms of sheer fun factor.