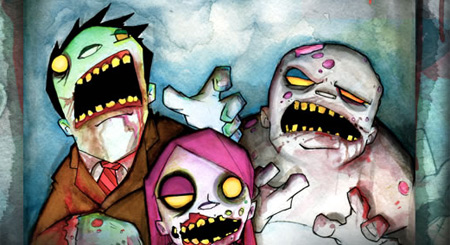 Undead City: Tower Defense is an interesting and amusing game in the tower defense genre. As with all tower defense games, the object is to prevent a group of enemies from travelling through the game board from one side to the other. In this game, the enemies are wave after wave of flesh eating zombies. The various game boards in Undead City are the streets of a ruined city – overturned cars and trucks litter the landscape, as do broken postal boxes and trash cans, and of course, quite a lot of blood.

To prevent the zombies from traversing the area, you are given a small amount of starting cash, and a selection of ‘towers’ to buy. In this game, these ‘towers’ take the form of humans that have not succumbed to the zombie menace. It is important to choose wisely between them, as they each have different weapons and costs, and your beginning funds are limited. The four types you can choose between are the soldier, who uses a pistol, the vigilante, who is armed with a shotgun, the pack soldier, who is equipped with land mines, and the stewardess, who carries a laser. After clicking on your choice, you then place the ‘tower’ somewhere on the game board, attempting to place it where it will be the most effective. Every time you kill a zombie, you earn money, which you can then use to either purchase more ‘towers’, or upgrade the attack range of the ones you already have.

Unfortunately, there are several problems with this game. The graphics are simplistic and childish, which makes the game rather boring. Also, the music is extremely annoying. Over and above that, the game gives no indication as to how many zombies you must kill to advance to the next level, which is extremely frustrating. All things considered, I cannot recommend this game.