Boxing Game, also referred to as Boxing Live, is a very detailed and professional fighting simulator with features you do not usually see in these types of games. You are immediately greeted with a full main menu that includes multiple options. The graphics are nicely done illustrations. The music, sound effects and voice work go well together. 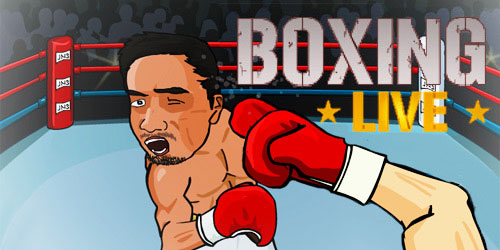 You play a boxer in this game trying to win as many championship belts as possible. The first impressive feature is that you can make a fully customized boxer. You can control the entire appearance from the face and hair to the gloves and shorts. You will also find a number of jokes in the character customization options. The second part of character creation lets you assign points to various skills like power, stamina and chin. These directly affect your performance during fights.

You have two basic options once your boxer is created. You can start fighting right away against the smallest opponent. You could also take time to train your boxer. Training allows you to increase your stats and boxing ranking as you learn the controls a little better. Training takes the form of mini-games or quick-time events. You basically have to hit the required keys in the right order for a certain period of time. You get one to three stars depending on your performance. You get larger stat increases for better performance. You can train as much or as little as you want between fights. A good idea is to do a few training rounds in each area before starting since even the weakest opponents are stronger than you are at first.

Fighting matches is pretty straightforward. You go into a first person view looking at your opponent. The arrow keys and control key each throw different types of punches. The layout is a little anti-intuitive. The space bar blocks. You have to strategically throw punches and block in order to land blows on your opponent. There are two ways to win. The first is to land the majority of blows and have the judges declare you victorious after six rounds. The other option is to knock your opponent out. If you win, then you unlock new opponents and new boxing arenas.

Boxing Game has just about every feature you want in this type of title. The matches are challenging and fun. The training is interesting enough to prevent you from getting bored. Your goal is to win all six belts in the game. There are even some nonhuman fantasy characters to fight.

Do you want a good and entertaining fighting game? Then the Boxing Live game is the right choice for you!