All of your romantic aspirations can be revealed through the intuitive programming of “Love Calculator.” This nifty little application plays the role of matchmaker by using name math to determine any couple’s viability. 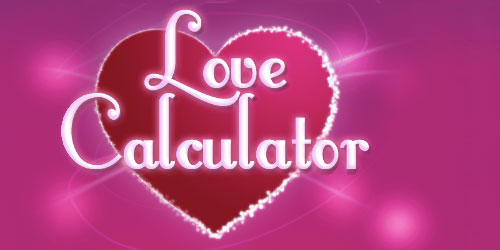 There are not any extra bells and whistles. This program gets straight to the point. After splashing the screen with a cutesy pink display filled with pixelated hearts, the program launches its main page.

Players can enter their name on this page followed by the moniker of their crush. Within seconds, the psychic program will initiate calculations, to show you if you do match to your crush. After the number crunching is completed, a percentage will be shown on the screen. This figure represents the probability of a successful love.

The designers of this game have remained mum about how it works. Their mysterious algorithm has immense powers, but the formula has not been revealed to the world. Still, the software most likely relies on an innate understanding of numerological laws.

To test out the program, many new users enter the names of celebrity couples. Without fail, the shown percentage matches publicly known romantic prospects between famous partners. This is an excellent indication of the Love Calculator‘s undeniable utility.

This kind of title is sure to be especially popular in the halls of high schools. It is the perfect combination of fun and flirty. The equation doesn’t sugar-coat results to make users feel better. In the end, it is even willing to declare a 0% chance of romance. On the other hand, a 100% is just as likely.

Because the software is incredibly simple, it can operate on practically any device. Even iOS devices and other mobile phones with limited functional capacities can handle this divine application. With the help of this electronic guru, boys and girls everywhere are becoming immersed in the world of dating.

Another nice feature is the lack of gender discrimination. Too many love apps require one male and one female. Same-sex couples can feel left out by that system, so it is nice to see this program implementing the generic phrasing of “Person 1” and “Person 2.” However, polyamorous pleasure seekers are still dissuaded by the assumed notion of monogamy.

Ultimately, this game is both charmed and charming. Besides typing, there are only two commands. The first one is a “Go” button that starts everything off, and the last one is a similarly designed link that says, “Calculate.” With that click, the sensual truth will finally be uncovered!

Test the game and calculate the love of a person towards you now! Good luck in the name of love!