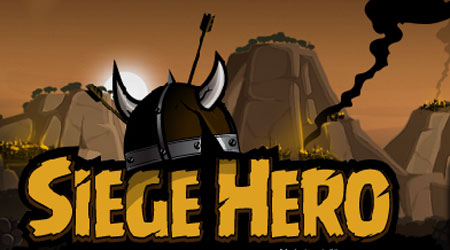 The ‘destroy buildings through physics’ games have come a long way in recent years. Games like Crush the Castle and Angry Birds have been the stars of the genre, but that doesn’t mean that there isn’t room for more. The key is that they have to offer you something a little different, and Siege Hero does a good job at separating itself from the pack with its own brand of wanton destruction and comic violence.

How to play Siege Hero? You are presented with a castle, keep, or structure at the beginning of each level, and with a click as to where you want to fire it, it will all begin crashing down. What is nice is that as long as you do tolerably well, you are going to advance to the next level. That means you get to see all of the fantastic additions that come with playing deeper into the game. Things like oil and bombs are going to only make the explosions more fierce and the devastation more complete.

As with any game of this design, there comes a little trial and error at times, especially if you are shooting for the highest scores possible. You can sit and ponder of a puzzle for a few minutes, and should be able to reason out what the best course of action is going to be, but at times getting the perfect score in later levels can be downright devious!

If you have never tried a destruction game, or are just looking for a great way to spend an hour or two, Siege Hero has crisp graphics, fun sound, and a little something you can go back to whenever you have an extra minute to spare. You’ll probably spend the first few levels getting used to the controls and seeing just how much damage you can do with a single shot, which is really the best part of a game like this. So get out there with your rocks and show those vikings who’s the boss!