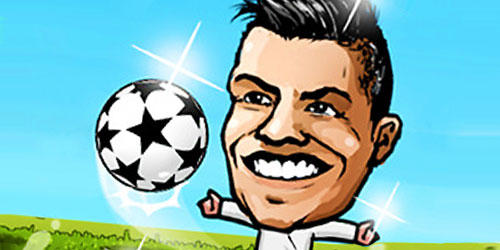 The graphics are bright and fun to look at. Everything is seen from the side. The images of the players and ball are a little small in some cases. The animations are all nicely done and do not distract from the action. The soundtrack consists of just a couple of songs that loop constantly in the background while playing. The sound effects are adequate although they are nothing special.

You start Puppet Soccer 2015 confronted with many menus containing several icons that are difficult to figure out. The game seems to have gone to great lengths to avoid using any text most likely in an effort to avoid localization issues. It takes a minute to realize that the starting screen contains all your stats in icon form. You really have to click on an icon in the bottom corner to get to the character selection window. You have to buy your initial soccer player. You can spend money upgrading three different stats to improve performance while in this window. You can also assemble a large team of people over time although you can use only one per match.

Matches in Puppet Soccer 2015 consist of you facing off against a single opponent. A ball drops down and you need to kick it across the screen into your opponent’s net. You use the I, J and L keys to jump and move your character. The K key and spacebar both kick the ball when you are near it. Some basic physics are involved in the game. The ball will bounce off your head and the net sending it flying into the air. The first side to score eight goals wins.

You can play through a large number of leagues and matches in Puppet Soccer 2015. You ultimately want to win a championship. Gameplay is very basic but fun. Matches are short and you earn money fast. Gameplay can get frustrating since the opposing players are sometimes undefeatable. The lack of text and overuse of icons also makes it hard to really understand everything that is going on and everything that you can do in the game. There is good replayability since you can purchase, earn and upgrade so many things. Puppet Soccer 2015 is a good game even if it takes you some time to get used to everything.

2 thoughts on “Puppet Soccer 2015: An interesting soccer game that puts you in a simplified field competing for the championship”