Picture Minecraft and Modern Warcraft coming together and you have a good idea of what to expect with Pixel Warfare. The game is a pixellated 3D-Shooter game that allows you to kill virtually everything that moves. The game is slightly reminiscent of the older 8-bit video games of the 80s and early 90s. This blast from the past is sure to provide you with plenty of hours of entertainment and is suitable for older audiences. 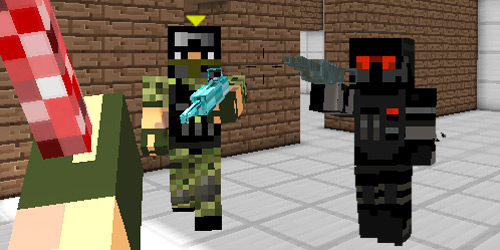 Game Overview
The game is a multiplayer game that allows you to go around killing the opposing team. It doesn’t matter if the players you kill are good or bad. The goal is to kill anything that moves. The game is rather violent and the opening sequences where you are required to kill or be killed sets the mood for what is to come. The object is to get a win for your side by virtually smashing the brains out of the other team.

This game has lots of blood and violence and requires the player to beat his opponent to death in a rather gruesome manner, even if the death is pixellated. Players need to be fast and ready to fight at a moments notice. Snipers can take you out when you’re not paying attention, leaving a pixellated mess all over the board. The game is a rather large and intensive game that takes some time to load.

One of the first things you’ll notice about the game is its highly thematic storyline. This is a good game for a spooky Halloween night and will suit players that are interested in a fast-paced and cunning game that challenges your reflexes. Even though the game is pixellated, it boasts surprisingly good imagery and a variety of colors to keep you interested. In fact, the game is mighty reminiscent of a certain set of building blocks designed for children.

Game Controls
With a very simple control interface, you won’t have much trouble learning to play this game. Movement is controlled by the W, A, S, and D keys on the keyboard. W moves the player up, S is down, A takes the player to the left, and D moves to the right. To reload your weapon, you simply press the R key. You can choose between your military weapons using the numbers one to six on your computer keypad. Press the Tab key to access the menu for the game.