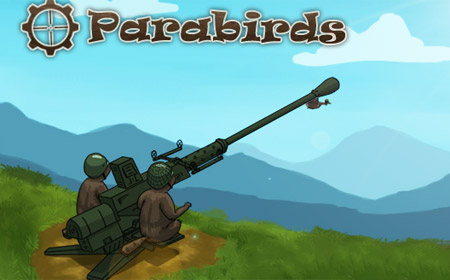 Protect The Guns In Parabirds

There have been countless games over the years that deal with protecting gun emplacements. Parabirds is one of the most popular ideas for shooting games that has ever come along, and it links the gamer back to the days for the World Wars, when arial combat was very new and protecting the guns at all costs was something that every general spent a lot of time thinking about. This is not the case in war any longer, not with so many automated defense systems and unmanned aircraft, but the games still keep this tradition alive and well in the minds of computer users.

Parabirds is yet another one of those games, and it is one of the best. If you have missed this kind of action, feeling like games are more about graphics and complex story lines than they are about fun and excitement, you are not alone. The makers of Parabirds have brought that fun and excitement back. They have taken things back to the basics, and the result has never been better. This is a game that you could play for hours on end without ever feeling bored or tired. This is a game that keeps you on the edge of your seat the entire time, a game that can even bring you up out of your seat when the action gets tense.

The basic idea of ParaBirds is that you are manning a gun emplacement in the middle of an empty field. You have unlimited shots, but they do cost you two points apiece. There are angry birds flying overhead, and these are dropping paratroopers toward your position. When they hit the ground, they will run over to your gun and hunker down next to it, where they cannot be shot. If enough of them get to you, they will blow up the gun.

You have two choices. You can shoot down the birds or you can shoot down the paratroopers. Since there are usually too many men in the sky to shoot at only the birds and survive, it is often best to shoot at the birds only at the very beginning. Then you need to start shooting the Paratroopers as fast as you can. You get points for every hit. You build up points as you advance through the different rounds. The farther along you get, the more birds their are and the faster the paratroopers descend on you.