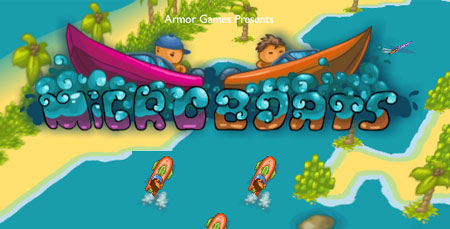 Microboats is a relatively straightforward racing game from Armor Games. The object of the game is to maneuver your boat through the increasingly difficult race courses faster than your opponents, while avoiding the various obstacles. The game is quite easy to play. Your boat is controlled with the arrow keys, and the camera angle can be chenged by pressing the space bar.

At the beginning of the game, you only have one micro boat to choose from, and you can either race against the computer in three different Grand Prix races, consisting of the races each, or you can race against your friends on the courses you’ve unlocked in Grand Prix mode. You also have the option to race against ‘ghost’ boats to try and unlock other boats for you to choose. Each rc micro boat has slightly different rankings among the four statistics, which are speed (how fast the boat goes), turning (the boats maneuverability), boost (the amount of extra speed the boat gets from crossing a boost marker) and recovery ( how quickly the boat recovers after hitting an obstacle).

The race courses start out fairly simple; the beginning course is a rough oval shape, with few obstacles. However, they quickly become more complex, with increasingly tighter turns, and many obstacles, including sharks which can wreck your boat, and lily pads that slow you down.
The three Grand Prix mode race sets are rather entertaining. The first takes place on a beach, the second near the polar ice caps, and the third series of races is on a lava flow!

The music for microboats is fairly simplistic; it is basically a loop track of some basic keyboard music, laid over a simple drum loop. The artwork is relatively good for a flash game; it’s obvious that the developers wanted clean, smooth graphics to make gameplay easy.
I highly recommend Microboats to any racing game enthusiast.