Goodgame Empire is a free game offered by Goodgame Studios and a great game to pick up for a few minutes when you are looking for a little casual simulation. 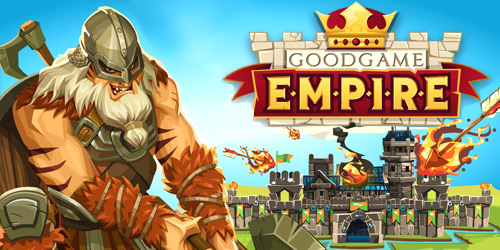 In Goodgame Empire you are given a castle and kingdom to rule and defend, but you have to build both from the ground up. It is you responsibility to maintain your resources so you will have enough wood and stone to both build new structures and fortify your defenses as well as produce enough food to feed your subjects and army. You will also have to build houses for your subjects to live in so you generate revenue by collecting taxes, in the form of rubies, which will help to build your army to defend your kingdom attack.

Goodgame Empire is designed similarly to a Facebook game and a nice blend of being challenging and involving where you are given goals and objectives by members of your kingdom. Completing the tasks will grant you extra rewards and expand your empire with the things you will be able to create. However, with Goodgame Empire it takes time to create your kingdom, so you either must wait for an objective to be finished or spend your rubies to have the task done instantly. Rubies are given as tasks are completed as treasure is found. While Goodgame Empire seems simple at first, operating your kingdom becomes more complicated as you expand your territory and develop your defenses by recruiting and training soldiers.

The games time-based objectives aren’t for everyone, as it means players can’t play for long periods at a time and you are required to check in frequently to be sure all is well with your kingdom. However, unlike most comparable-model games, this cool game by Goodgame Studios doesn’t only offer players plenty to do, the game has an astonishingly high-quality design and never nags you to spend cash or try to force you into spending money by attempting to ridiculously pad the costs of game extras. The game provides frequent, but random, encounters with bandits you will have to bribe or do battle with and treasure to discover and artifacts to forge, and you are protected for a period of seven actually days from the date you begin the game.

Goodgame Empire doesn’t have much of a story past the “Get bigger, stronger and smash your enemies,” philosophy, but the game has beautiful graphics and is a great casual diversion. Since it’s free you can try it for yourself with absolutely commitment.