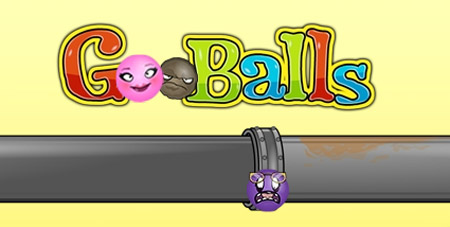 GooBalls is another interesting game that can be found at silvergames.com.  At heart, GooBalls is a matching game, in which the player drops various colored balls into a chamber, attempting to make matches of three or more of the same type.

GooBalls  is very easy to play, but is still entertaining and fun. Each of the different colored balls makes its own unique and amusing sound when you make a group of at least three, before disappearing and scoring you points. Unlike many other similar games, once two balls of the same color touch, they are stuck together, and the game uses real physics to determine where the balls will wind up from the momentum of the player dropping them.

GooBalls is extremely easy to control. The balls are dropped from a tube at the top of the chamber, which moves in whatever direction you scroll your mouse. Left clicking on the mouse will drop a ball, and pressing the space bar will switch from the ball currently about to be dropped, to another ball that you can see waiting in the tube at the top of the chamber. Alternately, the player can switch the ball by clicking on the tube.

Upon reaching level 2, the game designers start throwing in obstacles that you must work around, trying to drop the balls in such a way as to reach the others of the same color, without getting stopped by the obstacles. This is good, as it keeps a fairly simple and straightforward game from being far too easy to play.

As the player advances through the game, they are given a meter that slowly fills up with each match made. Once this meter is full, the player has access to various super power abilities that make the game easy, and more exciting, to play.

In addition to the humorous sounds made by the various groups of balls disappearing, the game also features a rather basic music track, on a loop, so you have something to listen to while you play. All in all, GooBalls is a very fun game, and can be recommended for anyone who likes Tetris or ‘Match 3‘ type games.