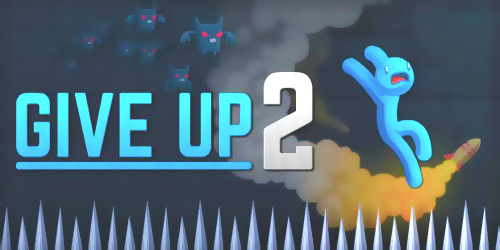 The first thing you will notice is that the graphics are slick and attractive especially when playing in full screen mode. The animations are incredibly fluid for every action. Additionally, every small detail such as a matching shadow is incorporated into the different levels. There is an upbeat soundtrack playing that enhances the mood of the game. The sound effects are impressive and even include professional voice acting.

The basic goal of Give Up 2 is to get from one end of a level to an exit on the other side. You have just a few basic controls to do this. The right and left arrows cause you to run in those directions. The up arrow triggers a jump. You can tap the up arrow again while in the air to do a double jump that allows you to go even higher. The jumping mechanics are complex and intuitive. You have to get a running start and time things just right in order to reach some platforms or avoid obstacles.

Give Up 2 uses an interesting iterative form of level design. There are over 40 levels in the game when you include unlockable bonus levels. Each level is just a single screen. You start out with a basic level layout that is usually easy to run through to reach the exit. When you move on to the next level, new obstacles will be placed on the screen in addition to what was already there. The obstacles get increasingly difficult as you reach the higher levels. There are spikes, falling bombs and even guns that actively follow and shoot at you.

In this game you are constantly being monitored by a seemingly omnipotent machine eye at the top of the screen while you are playing. The machine reacts to your mistakes and frequently spits out insults in a cheerful voice. A progress bar along the bottom of the screen shows how much farther you have to progress to beat the game. If things get too frustrating, then there is a large button labeled give up. Clicking this button triggers a funny animated sequence that ends the game.

Give Up 2 is easy to learn and fun to play. You have unlimited lives and unlimited time to complete each level although you are really trying to beat the game fast and with as few deaths as possible. If you enjoy platformers with a sense of humor and good production value, then Give Up 2 is the game for you.