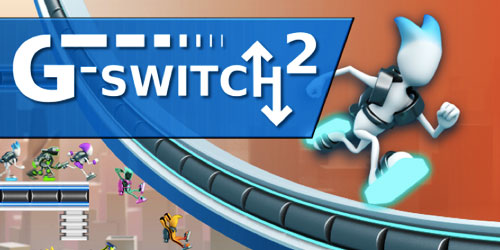 G-Switch 2 is an endless runner parkour game where the player must travel to the end of the stage. This is accomplished by jumping from wall to wall with the tap of a button or click of the mouse. If the player fails to do this, the player avatar will fall outside the camera and die. The game will then restart from the nearest checkpoint. Because of the large amount of checkpoints in any given stage as well the absence of lives, death in this game is not very punishing.

There are three modes of gameplay: Story, Endless and Multiplayer. In story mode the player must travel to the end of the stage in order to progress with the story. Endless mode provides an endless stage for the player to go through in hopes of obtaining a high score. In Multiplayer up to eight players can race each other through a stage until either someone finishes the race or everyone falls out of the game.

The game’s story takes place in an unnamed futuristic city, where a nameless white humanoid attempts to recall who he is and where he came from. As he travels through the city, he discovers a black humanoid who may be the key to restoring his memories, but he must continue to pursue him in order to find answers.

The graphics are crisp and very well done for a Flash game. There were times when I felt that this endless runner was made in Unity rather than Flash, which is quite impressive. The music is hard techno with a touch of rock and ambience, which I found to be quite fitting for the setting. Armor Games seemed to have put a lot of effort into making the presentation seem great.

Out of all the Flash games out there, G-Switch 2 seems to almost perfectly embody what makes them fun. The simple concept and controls, the fair challenge that keeps the player coming back for more, and the pleasant graphics and music make up the complete package that this game is. To recommend it is something that should go without saying if you like simple, yet fun arcade-style games.