As you may already know, the Flakboy games that are out all have pretty good reputations when it comes to fun and entertainment when playing the game. Flakboy Lab Escape follows in the same footsteps of good gaming entertainment. Several gamers have expressed that it may be even slightly better than the previous games due to the fact that it is slightly more challenging and the levels aren’t always the same like in the previous Flakboy games. 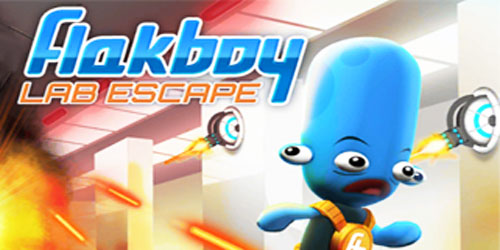 Now if you are curious to find out a little more what the Flakboy games entail, it is known as being in the category of a “running game”, Flakboy Lab Escape, especially. Continuing a similar story line to the other previous games, the player’s main goal is to help Flakboy escape the Lab he is in and to ultimately help Flakboy reach his final destination of safety.

Unlike the previous adventures Flakboy goes through in the other games before this, this time he happens to get himself trapped in a lab full of various dangerous entities and scenarios. The main player playing the game and controlling Flakboy’s moves is to ultimately help him to safety by completing a series of various challenging tasks in each mission throughout the game. These challenges he must get through include several different scenarios, but mainly doing a lot of running through the lab, sometimes a very specific distance, ranging throughout the games challenges, and collecting a certain amount of coins available for grabs.

When you as Flakboy finally obtain enough money and grab enough coins throughout the games journey, you are able to visit and browse the Upgrades section in Flakboy Lab Escape to have an opportunity to spend your winnings on upgrading several Flakboy’s abilities, in which there are a variety for the player to choose from. When you reach this point in the game you’re also able to check out your personal achievements you’ve obtained so far through the games journey. This game is said for the gamer to hopefully have fast reaction speeds when playing this game- as they will most likely succeed at a much higher level. The controls used in the game to control Flakboy’s moves are as such: click mouse to jump and hold for an even longer jump.

You can find the game on SilverGames.com.