Finger vs. Guns combines a few genres and an original idea to come up with a game that is entertaining and easy to learn. It uses typical cartoon graphics to illustrate everything happening on the screen. One of the benefits of the graphic style is that it allows for very smooth animations. This is important since the game is filled with frantic action. There is a full soundtrack with different songs for every stage and menu screen. The sound effects are acceptable although they leave a little to be desired when compared to the music quality.

You play the role of a finger in this funny game. You are represented by a large finger on the screen above everything else. A small figure on the screen is your enemy throughout the game. This enemy enjoys wielding his weapons and shooting at your finger when in trouble. The overall goal is to defeat this enemy at least six or seven times before you lose all your lives. There are a number of stages in the game that progress along a set story. You start in a field, move into an apartment and then go onto a rooftop. Each stage has different challenges even though they are only a single screen large.

You control the finger by holding down the mouse button or pressing your finger on the screen. You move the finger around in all directions. You use the finger to fight the enemy with the gun. You can use your finger to pick up the enemy, shake him around and even bash him into the ground. The enemy is firing at you the whole time. There are two life bars on top. If the gunshots kill you first, then you must start over. Your goal is to bash and smack around the enemy until his life bar is empty.

There are many good things about Finger vs. Guns. The gameplay is interesting because some levels have unique challenges like swatting down a helicopter. The enemy also starts to employ new weapons and items like shields. One drawback to the game is that the finger does not always behave consistently. A swipe sometimes bashes the enemy while other times it will do nothing. There is an achievement system and coins in the game you can earn by playing. The coins unlock weapons for you. If you want a fun and unique game, then try Finger vs. Guns. 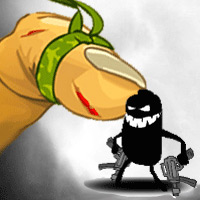 You can play this funny game here! Enjoy!