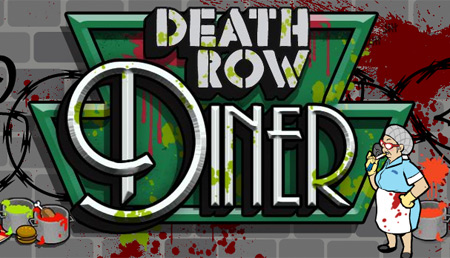 Death Row Diner is an interesting time management game, rather similar to other diner type games, with a particular twist. Instead of being set in a normal city diner, you play a kitchen worker in a maximum security prison, feeding Death Row inmates. The game begins relatively simply, with there only being two tables and two groups of inmates. However, this changes rapidly as the game progresses.

The game Death Row Diner is entirely controlled by clicking the left mouse button on whatever part of the game screen you wish to manipulate. When a group of inmates approaches the counter, you click on the pot of food, which serves the group. You then click on the inmates, and click on a table to seat them. After the inmates have finished eating, you click on them again to take the food trays, and then click the sink to wash them off.

Some inmates require a bit more attention. After eating the regular meal, some of the inmates want meat, such as chicken legs or hamburgers, and will show this with a thought bubble over their heads. After clicking on the type of meat they want, and then clicking on the inmates to serve them, game play resumes as normal.

There are also certain times in the game that you will be unable to serve the inmates fast enough. When this happens, they will become angry and start to fight. You must then rapidly click on the fighting inmates to break up the fight. After the fight has stopped, you will then need to clean up the areas of the cafeteria that have gotten covered in blood. Simply click on the mop bucket, then click on the blood to wipe it away, and finally click on the bucket again to put the mop away.

Death Row Diner is a very fun game, and I recommend it for adults who enjoy time management games.