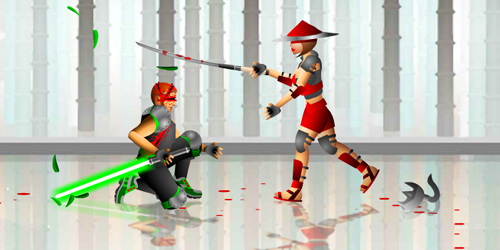 The graphics are stylized but not necessarily done well. All of the images in the game have a smooth gradient applied that makes them seem uninspired. The proportions of the characters are off as well. The weapons are interesting but lack any real weight. The animations are clumsy sometimes resulting in parts of the characters disconnecting during play. There is no background music. The sound effects are minimal but adequate for letting you know what is happening in the game.

You start “Dead Samurai” by choosing your character. You can choose from eight different characters. Each has a different look and weapon. The weapons are actually very varied. You can pick anything from a short knife to a chainsaw sword or even a light sabre. A button will tell you how to play although this is not much help since it is just sequences of numbers. You are immediately thrust into your first fight. The goal is to defeat every enemy in the game and become the ultimate victor. You are also trying to rack up points to appear on the global leaderboards.

Fighting in “Dead Samurai” is very confusing and does not always work as described in the game. The position you move your mouse in will decide what your character does. The movements also put your character into one of around 10 or 12 different stances. Moving the mouse around causes your character to do things like advance, retreat or jump. It does not always work. Clicking the mouse triggers an attack based on your current stance. It is difficult to tell what stance you are in at any time due to the muddled animations.

Matches in this game go by quickly. The outcome is often determine in the first few seconds. You either score some hits and defeat your opponent or go down fast yourself. Exactly what is happening can be confusing. The game includes a system where you can cut off limbs or lose your own. Wining a match does not involve much fanfare since you are just presented with a menu to move on to the next round. A group mode in the game allows you to localize your high scores so that you are competing only against friends instead of the global leaderboard. “Dead Samurai” is an interesting fighting game although the strange control scheme can take some time to learn at first.