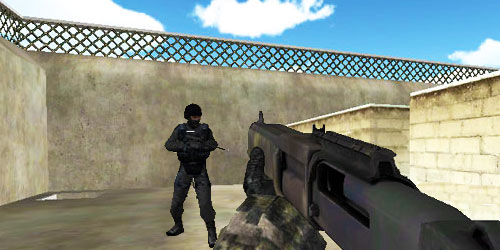 Combat 3 uses a typical military or tactical assault theme for the graphics, weapons and gameplay. The graphics in Combat 3 are adequate although they are far below what most people expect to see in first-person shooters today. There are no shadows and the textures are repetitive. There are also few special effects. The muzzle flashes from guns are practically invisible. There are very basic sound effects that have a somewhat hollow feeling.

You can start playing Combat 3 in two ways. The first is to play as a guest. You can just jump into a match. If you want to level your character and earn points between sessions, then you will need to register a free account to save your game data. You start in a lobby. There is no chat in the lobby. You just see a list of all the active games. There is a good selection of games available. Some have ten or more players. There are a few different gameplay modes like zombie, bomb and rocket. Team death match and basic death match are the two most popular by far.

Gameplay will feel familiar to fans of online first-person shooters. You can carry two weapons at any one time. You maneuver with the WSAD keys. The mouse controls your direction and your weapons. You can zoom in down your weapon’s barrel for a better view. Different weapons are spread throughout the maps. The variety of maps is very impressive. Part of this is because players regularly create and submit new maps for the game. Gameplay is pretty simple. You attempt to kill your opponents before they kill you.

There are some issues with the shooting game. You cannot crouch or sprint. This limits your tactical options. Gameplay is so simple that many people are using outdated tactics such as bunny hopping around the map to avoid taking damage. The quality of the maps varies greatly. Some maps encourage spawn killing so that you can never get into play. Others are full of maze-like passages that slow down the action. A major problem is that older players in the rooms will easily dominate newer players because they can purchase high-level weapons with the score points earned during matches. This leads to imbalanced games and one-shot kills.

Combat 3 does have most of the basic elements of first-person online shooters. Battle can be fast paced depending on your teammates and the maps. The selection of weapons is limited. Additionally, there are few regular clans in the game holding tournaments or clan wars. Combat 3 can keep you entertained for some time if you are forgiving about the drawbacks.

Play this shooting game now! You won’t regret it!