“100 Meter Sprint” is an interesting game that has you controlling a runner in the 100 meter dash at the international level. Players have a limited degree of customization for their athlete; players choose their runner’s country of origin from the United States of America, Germany, Trinidad and Tobago, Russia, the United Kingdom, Jamaica, France and the Netherlands. After choosing the country you wish to represent, you then move on to choosing a stadium to race in. With the exception of Rio, each of the 10 stadiums you compete in is located within the United States.

The goal of this sports game is to make it to 1st-3rd place in each race. Medals earn you prize money that can pay for training sessions, upgrade your racer’s stamina and/or top running speed. The cost of these sessions increases with each level. Fittingly, you cannot advance to another stadium until you earn at least bronze; ranking at 4th or lower place forces you to try again. Despite needing to progress through each stadium at a linear pace, all stadiums award the same amount of prize money for bronze, silver and gold medalists.

The controls in free game 100 Meter Sprint are relatively simple, if a bit taxing on the keyboard. Once a race begins, the player must rapidly tap the left and right arrow keys of his keyboard, representing the rapid dash of their character’s legs. Aware that you can’t run, or mash buttons, forever the game also uses a stamina mechanic; mash like crazy at the race’s start and your athlete will be too exhausted to keep up with the other racers at the half-way point. 100 Meter Sprints’s consistent gold medalists know when to ease off the mashing and when to push for the finish line.

The A/V offerings of 100 Meter Sprint are serviceable. While the background music during the menu screen can be annoyingly repetitive, the actual competition sounds are just the audience and the announcer. Graphics are completely serviceable and it is very easy to know what a given object is supposed to be. The game includes an option to mute the background music. Overall, 100 Meter Sprint is an alright excuse to kill time. One possible caution is that a marathon session of all 10 courses could greatly damage the button sensitivity of the horizontal arrow keys. 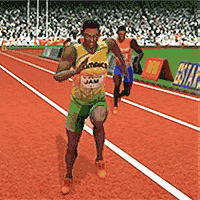