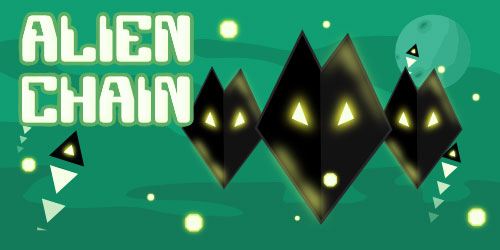 Alien Chain is a game that uses a relatively unique mechanic to challenge players. The graphics are very basic with most things in the game being nothing more than geometric shapes and odd polygons without textures. The graphics are fine, however, since the game is really focused more on the movement of small objects. The high contrast of the graphics is an advantage in that area. The sound effects are adequate although they lack any punch. The background music is nice and sets an interesting mood for the game.

Your goal in Alien Chain is to kill as many enemies as you can with the limited amount of ammunition that you possess. The game puts you in control of a missile launcher located along the bottom of the screen. If you tap the screen, then a missile will be launched from your limited arsenal. You can side the launcher right and left. The controls are a little clumsy. They are not always responsive.

Your enemies in Alien Chain are flying ships. The spaceships fly horizontally above your cannon. They are divided into different lanes. Some lanes go left to right while others move in the opposite direction. You have to launch a missile and hit one of the alien ships to start a chain reaction. This can actually be difficult since the missile is slow and the smallish targets are moving.

Alien Chain gives you points for completing quests such as destroying 10 enemies or firing 12 missiles. You use those points to buy upgrades that make you more powerful or the aliens easier to overcome. Your points carry over between rounds so that you have some persistent progress even if you lose a game. One minor drawback to Alien Chain is that the chain reactions are difficult to predict and plan. This means you are relying on luck most of the time. The game is still fun and has an aesthetic that many people will appreciate. Alien Chain is worth a look and could entertain you for hours on end.